Hacking on fingerprinting again or AES2550/AES2810 driver for libfprint

October 09, 2012
Back in 2007 I participated in driver development for AuthenTec AES2501 scanner, driver was later merged into libfprint project. I didn't hack much on libfprint, just sent few bugfixes, but recently AuthenTec announced that they're willing to send fingerprint scanners for opensource enthusiasts who wants to develop driver for those scanners. So far, so good... I've wrote a letter to AuthenTec and they proposed to send AES2550 or AES2810 scanner to me. I chose AES2550. Actually, AES2550 and AES2810 are pretty same (AES2550 driver should work with AES2810), the only difference is missing crypto engine on AES2550 (who needs cryptography anyway? :))

So, I've got parcel with scanner in August, but unfortunately had no spare time for hacking, I only coded driver stub and read datasheet from AuthenTec. 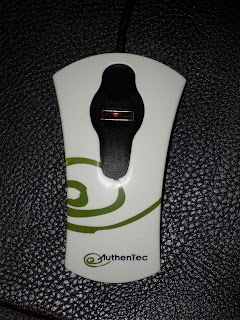 So, in September/October I've spent few (5-6?) nights hacking on this driver, and finally got it working on my AES2550. Image quality is much better then on my AES2501. Driver lacks crypto features for AES2810 and external flash support for both devices. Anyway, libfprint has no external flash API yet, so there's some space for hacking :) 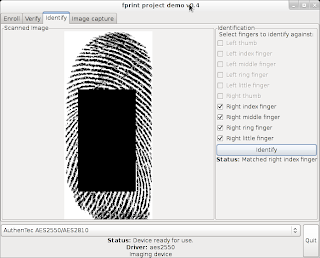 As usual, code is on my github page, branch aes2550-v2. Some testing is appreciated :)

P.S. Thanks to AuthenTec for opened specs and provided hardware! AuthenTec rocks!

Update: driver was merged into upstream, so you can use upstream libfprint repo
aes2550 aes2810 authentec fingerprinting libfprint linux scanner

Scott said…
Thanks for this work. I'm a newb, using Ubuntu 12.10, and I'm unable to install following the INSTALL info.

I installed libtools and some other stuff it needed.

Scott said…
Nevermind, I followed your link and ended up with an Ubuntu PPA that got it for me.

anarsoul said…
Scott, it's not about minutia count, there's match score, >=40 means match. But AFAIK you can see it only in debug logs (if libfprint was compiled with debug logs), it's not exported to users.
March 4, 2013 at 9:41 AM

Scott said…
Thanks! It seems it would be nice to have some control over this value (High, Med, Low) for permitting auth in a setting somewhere. I have no idea how that would be implemented or if possible/wise.
March 5, 2013 at 1:50 AM

I am trying to use

function in my code. For this I need to add API_EXPORTED in front of the function. But one I try to call the function I need some header files error one by one. As this function is declared in fp_internal.h. I get an error like this function is not in the scope. What to do?
August 9, 2013 at 10:39 AM

anarsoul said…
Arun Chauhan, it's internal API, it's available only for libfprint drivers and its internals, generic apps aren't supposed to use internal API
August 9, 2013 at 10:48 AM

Abdul Rehman said…
Nice work bro,
I want to interface AES1660 similar fingerprint sensor with MATLAB. Is there any way to use libfprint in windows?
November 17, 2014 at 9:30 PM

Popular posts from this blog

October 31, 2012
Gnome 3 devs are stupid enough to remove features before some replacement is implemented. Simplified nautilus and (what's much more important for me!) broken keyboard layout configuration. Well, you still can configure what layouts to use, but you can't choose usual shortcut to switch layout, and you can't configure led to indicate alternative layout. Well, I still can use setxkbmap (setxkbmap -layout "us,ru" -option "grp:caps_toggle,grp_led:scroll"), but that's f***ing ridiculous to remove things that were working here for years and propose nothing for replacement! They broke core functionality (who can work without a keyboard?!), and it makes me sick! Update:  more haterays to gnome-devs! Gnome 3 overrides xkbmap settings somewhere, I wonder if there's a way to prevent it... Update-2:  you can remove gnome-settings-daemon keyboard plugin as a workaround (sudo rm /usr/lib/gnome-settings-daemon-3.0/libkeyboard.so)
Read more

July 03, 2020
Recently I've got a new laptop with OLED panel only to find out that brightness control for OLED panels is not yet supported in Linux. Archlinux wiki page mentions using gamma ramp for controlling perceived brightness using hackish userspace tools (icc-brightness), so my first thought was to implement a hack for i915 driver to expose backlight interface that actually adjusts gamma ramp. So I went to #dri-devel to ask around whether this idea sounds too crazy and it turned out that there are better ways than using gamma ramp. Basically if you use gamma ramp you essentially reduce dynamic range, i.e. if you have 8 bits per pixel at 50% brightness you would get 7 bit, at 25% - 6 bit and that will result in banding artefacts at low brightness levels. To overcome that issue OLED panels actually have an interface to control brightness. There are at least 2 competing "standards" - VESA and Intel proprietary. First one is already supported by i915 driver while latter is not. Unfo
Read more

Recently I spent few evenings for hacking wayland . I like idea of wayland - rendering is done completely on client (in whatever way), compositor (server part) is responsible in rendering buffers from clients on the screen. Issue for me was rendering part of weston (reference compositor for wayland) - it uses GLES for compositing, but I want to try wayland and weston on devices without hw acceleration (pure software rendering), and running software GL on PXA270@312MHz does not sound like a good idea, does it? :) So I asked on #wayland@irc.freenode.org if it possible to implement software renderer, Kristian Høgsberg (khr) responded that in master branch of weston repo there's a nice abstraction of renderer, so it's possible to implement pixman renderer. So I did :) weston with x11-backend and pixman renderer khr and pq from #wayland were very helpful, and described place of renderer in wayland architecture, here're some points renderer just performs rendering of
Read more